Nothing much to share at this point, but Dell has revealed a new slate/tablet device at its keynote speech at CES in Vegas. Designed like a business smartphone, and some would say it is one considering the SIM slot it boasts, the new Reddish device  includes an Android platform preloaded inside, and a 5-inch touchscreen on top. There’s also an integrated 5MP camera at the back and three clickable buttons on the right – Home, Back and (maybe) apps. Furthermore, up the hill, it houses three additional buttons which looks like ON/OFF, camera and volume support. We’ve also spotted a built-in mic and Bluetooth, but that’s all we have for now.

Update1: engadget guys were lucky to sit around the table with Dell’s representative who was kind enough to give a quick tour and show them Dell’s new mysterious slate in a snap. From first impression we’re guessing it’s an Android 1.6 platform that runs inside, but quiet positive there’s a nice numpad add-on included in the keyboard and a tiny face camera right on front. We’re not sure whether it’d be called Mini 5 or codename Streak, but color us impressed from the way it performed. Vid and thumbs, after the break.

Update2: Turns out it’s a 5-inch mid, boasting 800 x 480 capacitive touchscreen,along integrated WiFi and 3G WWAN connectivity. It runs Android 2.0 (Eclair) instead of that 1.6 flavor and seems to endure a dual-LED flash 5mp camera behind and a 1,300mAh battery within. We’ve added another video after the break, courtesy of Slashgear and some Vietnamese chaps.

Update3: The Tinhte team has taken Dell’s Android-based Mini 5 slate/mid to a teardown session, and guess what they’ve found under the hood – a 1GHz Snapdragon processor, two microSD slots, integrated SIM card with 3G radio and a 1,530mAh battery, stronger than expected. Dissecting video after the break.

Update4: TechCrunch guys have managed to catch up with Michael Dell himself somewhere outside Davos conference halls, and look what he got, a “Mini 5” slate, in his words, which suppose to go live “in “a couple of months” with an Android based platform, 3G connectivity, 5MP camera and other good stuff. Dell refused to disclose any details about price or chipset.Checkout the third video after the break.

Update5: Dell says its latest Mini 5 will not run an Android 1.6 platform, but “something newer”, which we can’t confirm yet. In any case, it’s going to be refreshing and upgradable.

Update6: Apparently, the Mini 5 has a docking station which suppose to include HDMI output and a USB port. Check it out in T3 Greek Edition’s video after the break.

Update7: Looks like there’s plenty of stuff ahead. According to Neeraj Choubey, Dell’s tablet division GM, the Mini 5 is part of “a family of tablets” that will “scale up to a variety of sizes.” Some, are claimed to include “inexpensive data plans” in the bundle, some just Android powered.

Update8: Apart from the 5-inch 800 x 480 WVGA touchscreen, 5 megapixel camera, and the 30-pin docking connector, it seems that Dell will offer the Mini 5 (or Streak, depends who you ask) in wide range of premium colors. Hit the break to see your options.

Update9: Michael Dell says his 5-inch Streak “…will be available starting next month, first with our partner 02 Telefonica in Europe, then later this summer with our pretty good partner here in the United States, AT&T.” You hear that. Next month! 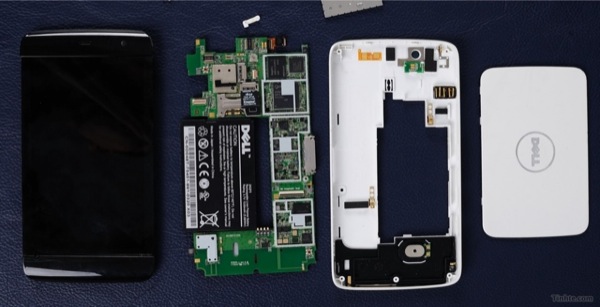 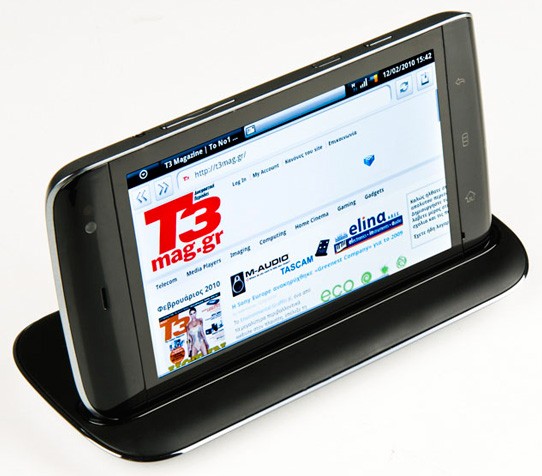 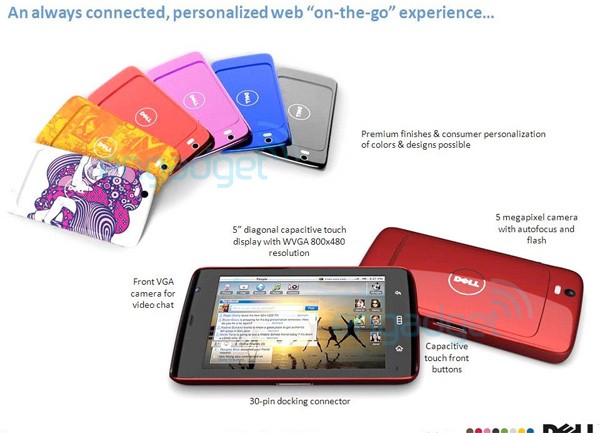