Google Buzz Announced, Turns Your Web Mail Socialized And Your...

Google officially released the Buzz. What is it, you’re asking? It’s Mountain View’s new platform that integrates into your Gmail account and turns it into a social community center (sort of), where you can share things like updates, photos, videos and a lot more with people you email and chat with the most. Additionally, the Buzz allows you to start interacting with those people and make in-mail conversations about anything you’d like in a simple and attractive way. The purpose, according to Bradley Horowitz, Google’s vice president for product management, is to simplify things and help people …”to find signal in the noise”. The target, in our humble opinion, is to launch a successful email product that would make people stick around all day long, and by that, create their own personal streaming platform that would eventually attract potential web users to follow their buzz and turn their voice even louder. Is it a war declaration against popular services like Twitter and Facebook? Time would tell. Google’s buzz  integrates with existing social networks and people can easily add their Flickr, Picasa, Twitter, Yahoo or Facebook accounts, and even Google Reader feeds, into the Buzz while creating  a new social networking interface/aggregator that would gather both mailing usage and media streaming in one accessible place. So, direct war? not sure, but challenging Facebook’s social media domination? definitely yes.

Basically, no special setup is needed and Gmail users should expect seeing the Buzz in their mail accounts immediately, or later on this week, as Google rolls out its new platform across the web, at these very moments . Once receiving it you will automatically start seeing lists of people, who you have emailed on Gmail, added to your Buzz. At that point you can start sharing with them whatever you want, including pictures, messages, videos, articles, news feeds and more, either publicly or in private. It’s a dual direction platform, so in that case you will see their updates as well, but also a few “Recommended Buzz” from friends of your friends, adjusted to your personal feedback.

As for mobile phones, Google also announced mobile integration for Buzz with dedicated apps and maps and an updated homepage you can log into at google.com/buzz. Buzz for mobile makes your sharing a lot easier than expected, it ” brings location to the forefront and makes it easy to have conversations about places”. To start, just type buzz.google.com in your mobile browser address line and begin posting buzz from your phone. You can tag your location or use the suggested tag if correct and later on, search all the public buzz created by your friends or nearby strangers around you in any given location you’ve personally tagged. This way you get yourself a personal location and recommendation platform, based on people’s most basic and common opinions, carried by their smartphones. As mentioned, you can use Google Maps and create public buzz directly from the layer, and attach photos into it from your mobile phone. You can create Textual Buzz shortcuts which appear as a small conversation bubble that everyone can see and read, or go even cooler by creating Voice Buzz shortcuts which let you post buzz without typing a word – Neat! Hit the break to watch the videos.

Update1: Looks like Google Maps 4.0 with Buzz support now available in the Android Market for those who own Android-based smartphones like G1, Droid or Nexus One. Feel free to download it right away and share the Buzz with your friends! 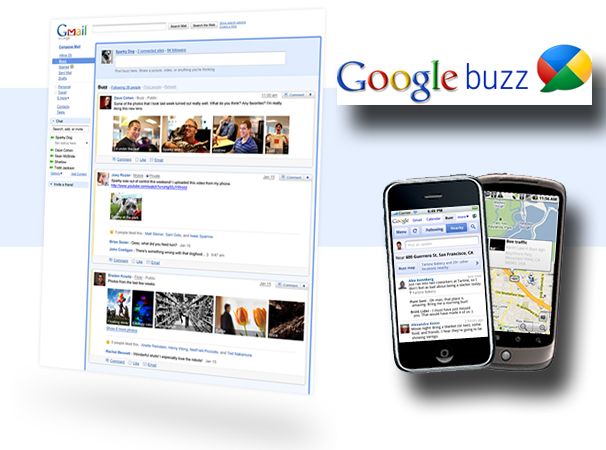