Looks like known Android-powered slabs such as the 5-inch Streak and 7-inch Looking Glass tablet, are not the only ones that Dell is planning to launch at full scale this very busy summer. In fact, according to a roadmap image acquired by Android Central guys exclusively, the Texan corp appears to have plenty more goodies, safely kept and well hidden under its dark out-of-range garner. And this ain’t a Dell fanboy talking trash, you know, this is something real, something concrete, that most geek audience should lend an ear to. This time, we have two Moblin devices ready to break cover and go under the spotlight in early and late Autumn. The first, known as the Sparta netbook tablet, packs an 11-inch 1024 x 768 display, paired with ARM Cortex processor, along with a special swivel base and a batch of optional connections, including WiFi, Bluetooth and 3G WWAN. The second in this session is the 0.9kg Athens “true” netbook, boasting that same similar ingredients its Sparta sibling has, like the aforementioned ARM processor and those several optional connectivity modules. This one however tucked with a non-swivel 11-inch platform. The third in that page, is the 7-inch Looking Glass Pro Android tablet which appears to be exactly like Dell’s neat Looking Glass Android tablet, spotted by engadget folks, couple days before. And then, there’s another one in this class, the LG Pro, which features premium components like advanced “HD screen” and digital TV tuner on top of the very basic fare. Finally, and most exciting for us on a personal level, is the 5-inch Streak, which according to this document suppose to come out in three different lanes: the US T-Mobile and European Vodafone versions, slated for this summer as well, while Chinese flavors are set for a Q4 release under all major carriers. Stay tuned for a lot more juicy details about this much awaited series. 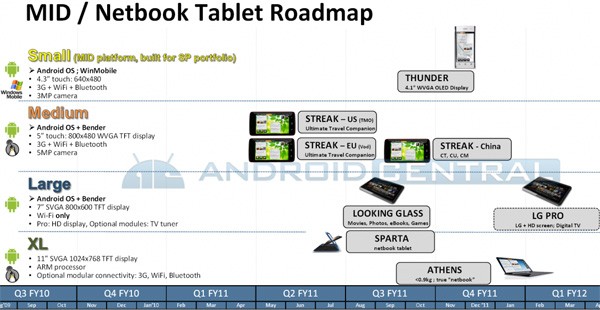