Remember the Courier? This “top-secret” dual-screen tablet prototype that Microsoft was working on for the past year or so? Well, turns out  it’s no longer included in Redmond’s next-gen products, and word on the street is that the software giant has regretfully decided to shut down its very ambitious project and take it out of its most innovative labs forever – in short, you won’t get it! And while many of us, gadget freaks, are desperately trying to come to terms with the shocking news, the courier teams were ordered to stop working on this specific development mission as it’d “no longer be supported.” Why, you may ask? We have no idea, but here’s what Frank Shaw, Microsoft’s VP of corporate communications had to say about it:

At any given time, across any of our business groups, there are new ideas being investigated, tested, and incubated. It’s in Microsoft’s DNA to continually develop and incubate new technologies to foster productivity and creativity. The “Courier” project is an example of this type of effort and its technologies will be evaluated for use in future Microsoft offerings, but we have no plans to build such a device at this time.

Thing is that we truly have no clue whether this sad end to one of Microsoft’s most exciting projects has anything to do with Palm’s recent acquisition by HP, or maybe with the fact that Apple is doing pretty well with its latest greatest iPad tablet. One thing’s for sure, we will definitely keep an eye out for further plans for a marketable slate machine and really hope for a better day – in the portable world – to come. 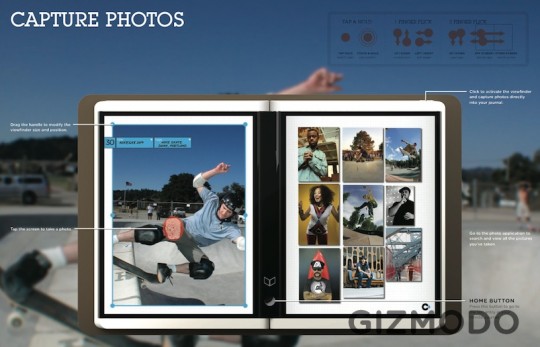