The Eee PC 1201PN is a relatively new netbook from Asus sporting the new Intel Atom N450 processor, paired with a 12.1-inch 1366×768 display and Nvidia’s Ion 2 graphics platform onboard. However, while this specific model lacked the discrete Optimus switching gear that enables users to easily jump between Intel and Nvidia cards, and by doing so, save some precious battery life on the go, a newer version – the Eee PC 1215 – that does everything the former one did, and even more, is said to support Nvidia’s Optimus feature and let you choose between those two graphics modes. Still with no price or availability dates to share at this point, the latest 1215 netbook also packs a dual-core Atom D510 processor, tucked with a pair of audio jacks, Ethernet, SD card slot, HDMI output, a bigger trackpad surface to flip around, and a nice matte cover lid that will hopefully reject any fingerprints, smudges and other kind of nasty spots. And if that wasn’t enough, check this out – the Taiwanese giant has also added a couple of blue speedy USB 3.0 ports, placed on the right side of the box – Huzzah! A quick video walkthrough is right after the jump.

Update1: Looks like the Eee PC 1215N has just turned official with all the good and powerful things inside. Apparently, it would run a 1.8GHz dual-core Intel Atom D525 processor that has no troubles handling NVIDIA’s Ion discrete graphics on that 12-inch 1,366 x 768 display the netbook boasts. PR after the break.

Update2: US debut is scheduled for mid-end of August, with both NVIDIA’s Optimus and Ion 2 graphics components already included and a very competitive “under $500” price tag to make you want it even more. 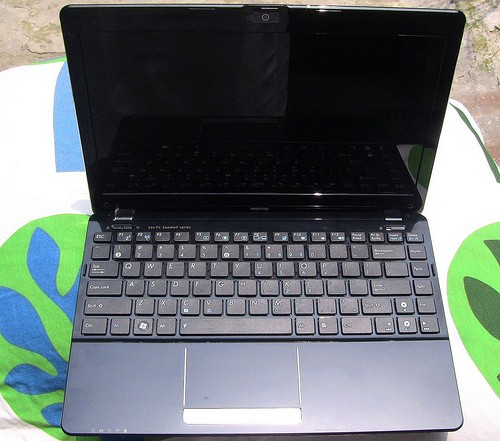 Consumers who want their multimedia entertainment on-the-go have always found their needs wanting. But that is set to change with the launch of the ASUS Eee PC™ 1215N Multimedia Netbook. ASUS has managed to squeeze the Intel® Atom™ D525 processor and the next generation NVIDIA® ION™ discrete graphics processor into a netbook to deliver stunning levels of performance. It also comes with the latest USB 3.0 and Bluetooth 3.0 technologies.

Delivering Multimedia Enjoyment in Droves
The next generation NVIDIA® ION™ discrete graphics processor found in the Eee PC™ 1215N enables it to deliver a visual experience never before seen on netbooks. The 1215N is capable of smooth, crystal-clear playback of high definition videos in 1080p on its 1366 x 768 HD widescreen display with 16:9 display ratio.

The 1215N also features a camera cover over the webcam’s lens to give users added privacy.

USB 3.0 will let users transfer files at up to 4.8GB per second, almost 10x that of USB 2.0; while Bluetooth 3.0 lets users sync up with a myriad of digital devices at speeds that are 8x faster than that of Bluetooth 2.1.

The 1215N is also capable of charging mobile phones via USB even when the Eee PC is switched off. The mobile phone can also draw power from the Eee PC’s battery.

ASUS @Vibe comes pre-installed in the 1215N and is a one-stop repository for various software and applications. It gives users access to music, videos, radio stations, and other forms of online entertainment whenever they please. ASUS @Vibe contains both localized and international content. These entertainment services are updated periodically and are available on a free trial.

The 1215N features LocaleMe, an application that leverages on Microsoft’s Bing map. It helps users pinpoint their exact location, as well as provide information about the surrounding areas. Users can use LocaleMe to find addresses and route directions.

Eee PC™ 1215N users are also granted access to Boingo global Wi-Fi services at a special price. A single account gives users access to over 100,000 hotspots at airports, hotels, cafes and restaurants around the world.