As more and more people keep talking about Cupertino’s iphone 4 mobile device and this all antenna reception issues, it seems that Apple, the mother company, is finally realizing the time has come to start doing something about it – the sooner the better. And one of the steps the company has just taken in order to try and extinguish the flames is the new iOS 4.0.1 that Steve Jobs and the rest of his fellows has officially released to the pond (updating iOS4) and that apparently “improves the formula to determine how many bars of signal strength to display.” The platform itself is already available for a download via iTunes and supports only iPhone 3G, 3GS, and iPhone 4 machines.

Update: So Apple has urgently called a press conference to speak about the “Antennagate” reception issues and the good news is that everyone, I mean EVERYONE is going to get free bumpers (case) when buying a new iphone device. If you already bought one, just go straight into one of Apple stores next to your house and get a full refund. Here’s what Steve Jobs had to say about it:

“You know, we’re not perfect. We know that, you know that. And phones aren’t perfect either.”

“A free case for every iPhone 4 buyer.” 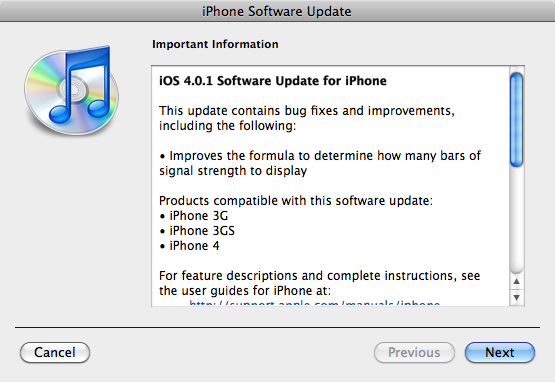