Sylvania To Roll Out a 7-inch Android Tablet For $180 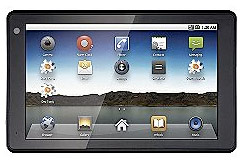 Looking for a low-rate Android tablet bargain? Make sure to check out Sylvania’s 7-inch Android 2.1 device, now being offered on Kmart for a mere $179.99. Pretty reasonable price for something that boasts a 7-inch 800 x 480 touchscreen (probably resistive), along with 512MB of RAM, 2GB of Flash memory, WiFi, front-facing webcam and a bunch of desirable ports (such as mini-USB, microSD slot and HDMI out), isn’t it? Not to mention the six-hour battery that is also included inside the package. But that probably won’t change anything for you, knowing that you won’t get any access to Google’s Android Market, eh? Well, we’re just assuming in here, so there’s still a glimpse of hope.