Viliv to Roll Out Two Android-based and One Windows 7-based...

It’s been quite a while since we’ve last heard anything special from Viliv, but with CES 2011 just around the corner in early January, it is rumored to be triple launching a new line of Android/Windows tablets of its own. And while we’re still unfamiliar with pricing or in-depth specs, the header of the following picture, pretty much says it all. In other words, the company will be showing off a couple of Android-based tablets, the X7 and X10, sized at 7-inch and 10.2-inch, respectively, while the third link in that series, the x70, is named by Viliv as the “most slim and light Windows 7 tablet in the world” – Now that’s a one hell of a kick, isn’t it? Regretfully, there’s nothing further to be said at the moment, so stay tuned for a lot  lot more. 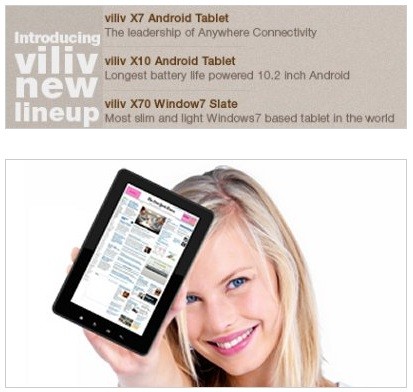