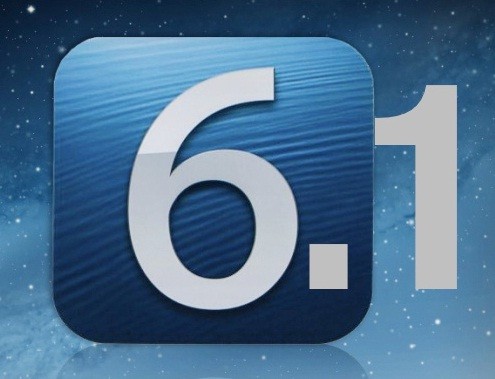 Apple has just released iOS 6.1, which is now available for various iPhone, iPad and iPod touch models. The new iteration which went out early this morning, and can be obtained either through iTunes or over the air, is Apple’s major release since last September, and said to include a 4G LTE support  for additional carriers around the world, as well as the ability to buy movie tickets in the US via Fandango, with Siri, the personal assistant. In addition to that, iTunes Match users are now able to download individual songs from iCloud, a feature that was there, then removed, and now making a comeback. But that’s not all, the Cupertino-based company has also added a few bug fixes to their recent pack, along with some tweaks to Safari, a minor design change to the music playback controls on the lock screen, some useful changes to the mapping software, and other useful things that can ease your work. Apple is slowly pushing its latest version out to the world, so be patient and check for updates. You can also read the full PR after the break.

Update1: Apple releases another iOS update (iOS 6.1.1), this time to fix some issues “… that could impact cellular performance and reliability for iPhone 4S.” The new update has been released a short time after a call message (via SMS) from some of the biggest European carriers, that warn their iPhone 4S users not to get Cupertino’s latest iOS 6.1 upgrade, due to 3G connection issues that prevented them from making calls with network coverage, or send text messages. In addition to that, there were minor problems with limited battery life and range, which made Apple release their next version really fast. Finally, you can easily get iOS 6.1.1 through your personal iTunes account or download it here. Update2:  And only few days after, Apple officially rolls out iOS 6.1.2 in order to fix those Microsoft Exchange bugs and pesky battery issues that were introduced in previous release. The new version is already available and can be obtained either via iTunes or through your iphone OTA update.

Apple Updates iOS to 6.1 New Version Adds LTE Support For 36 Additional iPhone Carriers Worldwide CUPERTINO, California-January 28, 2013-Apple® today updated iOS to version 6.1, adding LTE capabilities to 36 additional iPhone® carriers and 23 additional iPad® carriers around the world, so even more iPhone 5, iPad mini and iPad* with Retina® display users can experience ultrafast wireless performance** to browse, download and stream content at blazing fast speeds. To date, iOS users have uploaded over nine billion photos to Photo Stream, sent over 450 billion iMessages and received over four trillion notifications. “iOS 6 is the world’s most advanced mobile operating system, and with nearly 300 million iPhone, iPad and iPod touch devices on iOS 6 in just five months, it may be the most popular new version of an OS in history,” said Philip Schiller, Apple’s senior vice president of Worldwide Marketing. “iOS 6.1 brings LTE support to more markets around the world, so even more users can enjoy ultrafast Safari browsing, FaceTime video calls, iCloud services, and iTunes and App Store downloads.” iOS 6 features include Siri®, which supports more languages, easy access to sports scores, restaurant recommendations and movie listings; Maps with Apple-designed cartography, turn-by-turn navigation and Flyover view; Facebook integration for Contacts and Calendar, with the ability to post directly from Notification Center, Siri and Facebook-enabled apps; Shared Photo Streams via iCloud®; and Passbook®, the simplest way to get all your passes in one place. Additional updates in iOS 6.1 include the ability to use Siri to purchase movie tickets in the US through Fandango, and iTunes Match℠ subscribers can download individual songs to their iOS devices from iCloud. The revolutionary App Store℠ offers more than 800,000 apps to iPhone, iPad and iPod touch® users, with more than 300,000 native iPad apps. App Store customers have downloaded over 40 billion apps, and Apple has paid over seven billion dollars to its incredible developer community. Customers can choose from apps in 23 categories, including newspapers and magazines offered in Newsstand, games, business, news, sports, health & fitness and travel. Availability iOS 6.1 is available as a free software update today. iOS 6.1 is compatible with iPhone 5, iPhone 4S, iPhone 4, iPhone 3GS, iPad (third and fourth generation), iPad mini, iPad 2 and iPod touch (fourth and fifth generation). Some features may not be available on all products. For more information please visit www.apple.com.