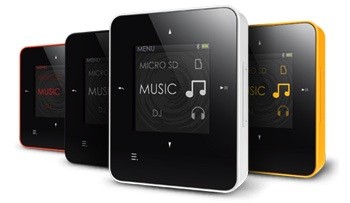 Although some of you might have already forgotten, most don’t, and we thought it would be nice to bring in a little piece of info about it. You know, those tiny MP3 players that hang around your neck? Well, they still do exist nowadays and for the record, still make a few headlines. The latest news in that regard is that South Korean giant, Creative is rolling out a new line of products, dubbed Zen Style M300. So what’s inside, you may ask? A built-in Bluetooth 2.1 connectivity, along with your choice of 4GB, 8GB, or 16GB capacities, a microSD card reader and a 1.45-inch screen display, right on top. In addition to that you’re getting an FM radio, paired with an integrated mic and estimated 20 hours per battery set – covered by variety of nice and lavish colors, including black, white, red or yellow. Availability wise, we’ll have them up sometime in June, with prices starting at $40 for the basic version and up to $90 for the most expensive one. Full PR after the break.

This allows users to enjoy music from the player wirelessly from all compatible stereo Bluetooth headphones such as the Creative WP-Series, which includes the ultra affordable Creative WP-250, and Bluetooth speakers such as the all new ZiiSound Dx Series and Creative D80, as well as Creative’s existing line-up of wireless speakers

The Creative ZEN Style M100 was also launched today, offering the great design and features of the ZEN Style M series of players without Bluetooth connectivity and FM Radio.

Both the Creative ZEN Style M300 and Creative ZEN Style M100 feature Audible support, giving users the option of enjoying a wide range of audio content that includes books of all genres. Both players also come pre-installed with a complete edition of Alyson Noël’s Evermore, the first book in her thrilling Immortals series.

This announcement relates to products launched in Europe. Availability is subject to change without notice and may differ elsewhere in the world according to local factors and requirements. ZEN and Sound Blaster are trademarks or registered trademarks of Creative Technology Ltd in the United States and/or other countries. All other trademarks are the property of their respective owners.