Zune HD 64 Sprouts Out In The Wild (Update: Confirmed)

Well, look what do we have here, a 64GB Zune HD player, sneaking out on Microsoft’s Zune official website just like that, out of the blue, boasting twice the size of an ordinary 32 gigs version and maybe with some other interesting treats hidden under the lid. Regretfully, it’d be hard to tell right now since most details are slim or missing. So meanwhile, ’till it gets tangible, you can hit the bottom link  and hope for juicy info like price and availability to show up as soon as possible.

Update1: The new 64GB Zune HD is now confirmed and due out on April 12th for $349.99 and myriad of colors including Platinum, Black, Blue, Red, Green, Purple and Magenta, while both 16GB and 32GB versions to get a price reduction, that will set prices at $199.99 and $269.99, respectively. Press release after the break.

Update2: Apparently, it’s now available for your orders, at $349.99, as predicted, but won’t include the v4.5 firmware update preloaded, so you’ll have to upgrade on your own. 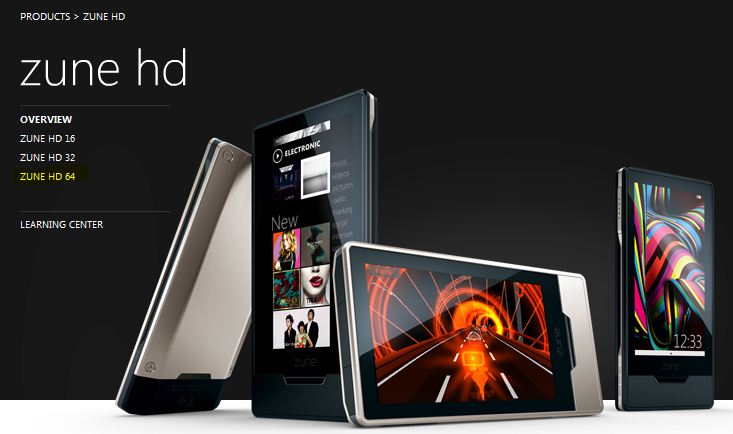 We’re excited to share that Zune fans will be able to purchase a new 64GB capacity of the popular Zune HD device for $349.99 starting April 12th through ZuneOriginals.com. By increasing the Zune HD capacity to 64GB, users will be able take up to 16,000 songs, or 20 hours of high definition video from Zune Marketplace, or 25,000 pictures* on the go! Customers will be able to customize their Zune HD 64GB through ZuneOrginals.com, available in their choice of Platinum, Black, Blue, Red, Green, Purple and Magenta colors.

In addition to introducing the new 64GB capacity, we are also reducing the prices of the 16GB and 32GB devices. Starting today, price lists are being distributed to retailers, setting the Estimated Retail Price (ERP) for the Zune 16GB device at $199.99 and the Zune HD 32GB device at $269.99.

With its OLED multi-touch screen, built-in HD radio, HD video out capabilities and Internet browser, Zune HD is a full-function media player which has received accolades from press and consumers. We’ve also announced details of an upcoming firmware update which will add even more features to the device, such as Smart DJ auto-playlists directly on the Zune HD, ability to browse, stream and acquire music from Zune Marketplace on your TV (while the device is connected to a TV set through the A/V dock) and expanded codec support allowing users to play more video formats natively from the device.

We are excited to be offering a great range of storage capacities for the Zune HD at a competitive price point and will be sharing more news on the availability of the 4.5 firmware in the coming days.