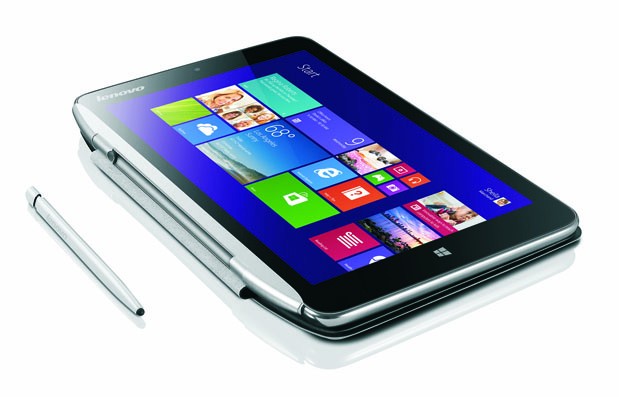 One category that has been so frequently mentioned in the portable computing area is the 8-inch tablet range. Companies like Apple, Acer and even Dell are already on board with this burgeoning mid-size consumer trend. Another electronic giant that has officially announced a new slate in that same exact scale is HP, and Lenovo, who is a well known laptop company, has recently joined the growing field as well. But with all due respect to the others, I would like to keep this post focused on the last corp mentioned in that list.

As of today, the Chinese group is offering its first 8-inch Windows 8.1 slate with a 1,200 x 800 screen resolution and an Intel quad-core Bay Trail SoC for better performance and low power consumption. The new tablet is dubbed as the Miix2, and will be made available sometime this month for $299 for the very basic pack. Besides the latest Windows operating system, you will also be getting the popular Microsoft Home Student Office and the new IE 11 browser for an optimized internet surfing experience. In addition, it also comes with two integrated cameras: a 2MP front facing camera and a 5MP rear-facing shooter. Buyers will get to choose between 16, 32, and up to 128GB of storage space, and there are many optional accessories to suit and complement the tablet from detachable cover casings to traditional stylus pens.

Measuring only 8.35mm thick and weighing a mere 350mg, the Lenovo Miix2 8-inch tablet delivers a 16:10 widescreen experience that deftly balances visual experience with portability. The 10-point multi- touch WXGA display delivers an 800 x 1280 resolution and its impressive 178-degree viewing angle means no one is left out of the fun. Equipped with two webcams, one in front (2MP) and one in back (5MP) 1, the tablet is designed for effortless video chatting and photo sharing. Pre-loaded with Windows 8.1, the Lenovo Miix2 8-inch brings all the enhancements of Microsoft’s latest operating system, including enhanced searching and sharing; improved Web-surfing with the new IE 11, touch optimization and the return of the popular “Start” button.

Underneath the hood, Lenovo Miix2 8-inch packs a powerful punch with an Intel®Bay Trail-T Quad Core processor, based on Intel® AtomTM S architecture and integrated Intel HD Graphics (Gen7) with Clear Video HD technology for smooth video performance. This combination of speed and responsiveness separates the 8-inch tablet from the tablet pack, while making the most of the Windows 8.1 OS. With up to 128GB of eMMC onboard storage (expandable up to 32GB with micro-SD slot) 2 for videos, music and photos, the Miix2 is standout tablet designed for users “on the go.”

The Lenovo Miix2 8″ also encourages productivity outside the office. The device comes pre-installed with Microsoft Office Home & Student 2013, allowing users to easily view, edit and manage their documents right out of the box. The tablet also offers the option of a stylus and detachable cover. The cover protects the screen when not in use and doubles as a stand for viewing content on the device. The stylus is a perfect companion for drawing, sketching or taking notes and further enhances productivity.

“Many users want the convenience of a smaller screen tablet, but do not want to lose the performance and convenience of a powerful, quad core Windows 8.1 device. With the Lenovo Miix2 8-inch, users can take advantage of a small, light form factor without sacrificing performance,” said Bai Peng, vice president and general manager, notebook business unit, Lenovo Business Group. “The Lenovo Miix2 8-inch is a great example of how thoughtful design can deliver the best of both worlds.”

The Miix2 8-inch will be available later this month beginning at approximately $299. *