The iPad has just made it to Apple’s online store, in case you haven’t noticed, and for those interested in buying one (or two) and have a neat 9.7-inch capacitive-touchscreen tablet added to their growing gadgets collection (that would eventually turn dispensable one day), it’s up and ready for your personal pre-orders starting at $499 for basic 16GB non-3G version and gets to $829 if you choose to nab the 64GB with WiFi & 3G edition. That said, there seems to be yet another iPad model out there, the kind that comes very limited, with a diamond-coated panel, boasting 11.43 carats of G/H color diamonds rated at VS2/SI1 for clarity and being offered by a company called Mervis, specifically for deep pockets/irrational people who are willing to pay a whopping $19,999, to get it. And despite the undisclosed specs of this stock slate version offered, it probably wouldn’t be so hard to find the guys who care about design rather than the ‘Pad – sigh! 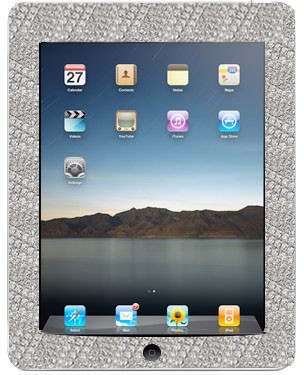