Oh snap! what’s this? A 7-inch tablet which runs an Android 2.1 OS with a ridiculously low US$150 price tag? That is exactly what the new Augen slate offers. Still not available on shelves (try next week), this nice sleek Florida-based Android machine packs whatever you might need to operate your day-to-day tasks, for a fairly reasonable price. Naturally you shouldn’t expect much, considering the price, but given the fact you’re going to get a WiFi connection, 2GB of storage, 256MB of RAM, and a 7-inch resistive (and hopefully responsive) touchscreen in return – this deal looks pretty attractive for us, isn’t it?

Update1: Engadget’s Joanna Stern has managed to put her hands on one of these 7-inch plastic-made Augen Gentouch 78 devices and you can take a look at the quick hands-on video preview after the break.

Update2: If you still have a chance to get one of Augen’s new Android tablet machines from local Kmart stores, – just do it – Otherwise, let it go, because the next batch apparently won’t include Google’s apps preloaded inside. Why, you’re asking? Because the company didn’t have any Mountain View permission to load them up to its latest 7-inch tablets lineup and Google probably didn’t like it. That said, both companies are working together to make sure that future products will have secured rights to make them run. PR after the break 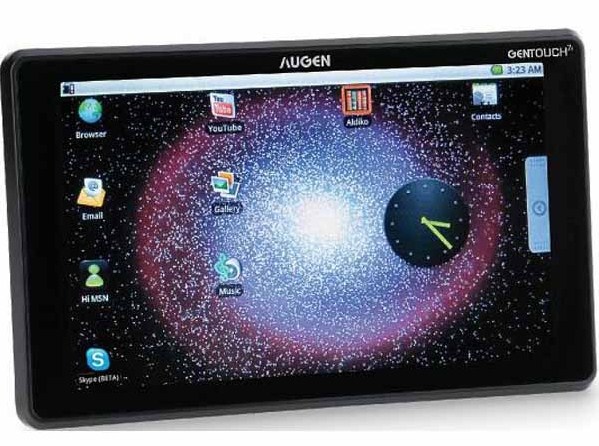 Florida- August 07, 2010 – Augen Electronics Corp., an innovator of tablet pc’s, netbooks, and eReaders, would like to deliver the following statement to address the circulating media gossip regarding Augen’s preloaded apps.

On July, 29 2010 Augen had a constructive conversation with Google Inc. The topic of the discussion was Google’s Application Suite. As you know, Google Inc. has released the source code for the entire Android platform under the flexible and commercial-friendly Apache 2.0 open source license. Augen is free to use that open source code; however, the suite of applications comprising Google Mobile Services on Android are proprietary to Google and have not been released under open source licenses. The Google Mobile Service and Android Apps were pre installed during the development process on our tablets for testing purposes, and were not removed unintentionally before releasing the products in the market place.

Google and Augen came to a mutual understanding that the Google Mobile Services Application Suite pre-installed on the GENTOUCH/ GENBOOK Series; could not be removed due to technological constraints for the products that were sold, shipped, or already produced.

For future production runs and deliveries, Augen will block and remove the Google Mobile Services Application Suite from the current devices until further notice. We are currently in communication with Google Inc. to obtain the required licensing for upcoming products, and will announce in our future statements the timelines and availability of these products as it will become available to us. However, for your convenience Augen will add applications to accommodate the absence of the Google Mobile Services Application Suite.

OUR COMMITMENT TO YOU…

The future of Augen holds a key to develop market conscious products with a vision of delivering the latest and emerging technologies, being available and affordable to every household, big/small corporation in the United States of America and worldwide.

We are at the final stages of releasing an entire new line of products which incorporates the newest technology and concepts, that will make a difference in your every day lives. We encourage you our Gen Nation, to follow the exciting products that Augen will be unveiling in the very near future. We are here to put the world at your fingertips and take you beyond the realm of the market that exists today, bringing you with us into a new era of open world communication and computing.

We are a US based company and understand and incorporate your wishes, desires, and requirements in our company’s DNA. We are here for you and are looking for your continued support, and excitement in our current and future releases.