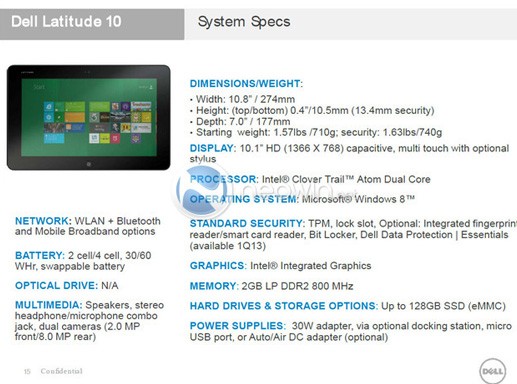 We all know that tech world is changing directions every year or so. But what about Dell? Do they plan on switching to another OS? It’s hard to tell at the moment, but according to a document obtained by the good guys over at NeoWin, the US-based computers giant is seriously considering a Windows 8 tablet. Whether it’s true or not, we’re looking at a Dell Latitude 10 running Microsoft’s latest and greatest platform on board. The slate is listed with a 10.1-inch 1366×769 touchscreen, and said to include Intel’s dual-core Atom processor under the hood. In addition, it will be offering a fingerprint reader, paired with 2GB of RAM, and up to 128GB SSD in storage capacity. You’ll get to choose between a smaller battery that delivers between six to eight hours, or a bigger one with an estimated 12 hours of  working life. No announced price or availability yet.

[via The Next Web]