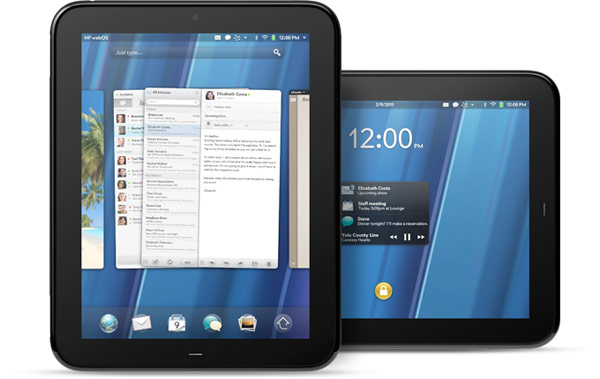 After a year of rumors and plenty of speculations, the HP Touchpad is now very much a reality. Some might even say it is a real contender to the iPad tablet. Well, in terms of price everything’s pretty much the same, as the 16GB version will run for $499.99 and the 32GB for $599.99. According to the company announcement on Thursday, the first webOS-powered tablet which boasts a 1.2GHz Qualcomm Snapdragon processor along with a 9.7-inch touchscreen display, will become available Stateside on July 1st (pre-orders start at June 19th) with European/Australian launch dates just a few days after. In addition, HP has indicated that it is planning to offer a 3G model as well, in partnership with AT&T, later this summer. Full PR after the break.

Update1: And looks like the brand new TouchPad device from HP is about to officially start selling in the UK on July 15th, with prices ranged between £399 for the 16GB WiFi-only model, or £479 for the 32GB version, at Great Britain’s top retailers like Argos, Carphone Warehouse, PC World, Amazon, and much much more.

Update2: Looks like it didn’t take long for the prices to drop down, as HP officially confirms a $100 discount off its brand new TouchPad lineup, which brings us to a grand total of $399 for the 16GB version, and $499 if you’re buying the 32GB one.

PALO ALTO, Calif.–(BUSINESS WIRE)–HP (NYSE:HPQ) today announced that the Wi-Fi version of HP TouchPad will be available in the United States on July 1.

“The platform’s unmatched features and flexibility will continue to differentiate HP products from the rest of the market for both personal and professional use. This is only the beginning of what HP’s scale can do with webOS.”

HP’s first webOS tablet will be available in the United Kingdom, Ireland, France and Germany a few days later and in Canada in mid-July, with availability scheduled to follow later this year in Italy and Spain, as well as in Australia, Hong Kong, New Zealand and Singapore.

HP TouchPad will be available from U.S. retailers, commercial resellers and direct from HP with the option of either 16 GB or 32 GB of internal storage(1) for $499.99 and $599.99, respectively.(2) Preorders in North America and Europe will begin June 19.

“What makes HP TouchPad a compelling alternative to competing products is webOS,” said Jon Rubinstein, senior vice president and general manager, Palm Global Business Unit, HP. “The platform’s unmatched features and flexibility will continue to differentiate HP products from the rest of the market for both personal and professional use. This is only the beginning of what HP’s scale can do with webOS.”

With webOS, HP TouchPad users have a next-level multitasking experience, access to the web, premium audio playback with stereo speakers and Beats Audio™ technology, the ability to find information on the device or in the cloud using the Just Type feature, integrated access to their information with HP Synergy, and HP’s exclusive Touch to Share capability for sharing web addresses between HP TouchPad and compatible webOS phones.(3)

HP also announced it will be partnering with AT&T to introduce a connected version of HP TouchPad later this summer. More information will be available closer to availability.

More information about HP TouchPad, including product features and specs, is available at www.hpwebos.com/us/products/pads/touchpad.