Lenovo is Preparing To Launch a 10.1-inch Ice Cream Sandwich... 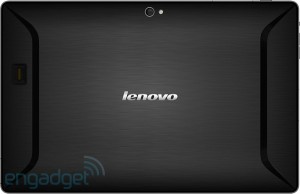 Rumor has it that Lenovo is planning to release a 10.1-inch Ice Cream Sandwich tablet with a 1.6GHz Tegra 3 chipset inside, by the end of the year. According to a tipster to engadget, the nameless Lenovo device which boasts a brush metal cover on its back, will presumably include NVIDIA’s latest and greatest quad-core Tegra 3 T33 “Kal-El” SoC, paired with 2GB of DDR3 RAM, a full sized USB port, a fingerprint scanner, a rear facing camera of some undetermined description and Google’s top-notch Android platform running on board. Other than that, we have no real details as far as measures, pricing or availability, so stay tuned to learn even more.

Update: New details emerging from the CES show are clearing up the speculations around Lenovo’s upcoming Android 4.0 tablet, the IdeaTab K2, which is rumored to include a high-def 1,920 x 1,200 IPS display, along with a pair of surround technology speakers, and either 1.6GHz or 1.7GHz speed clock CPUs at your choice. To learn more, simply click the jump and watch the hands-on video.