At this point it’s really hard to tell which is more accurate to describe Sharp’s new Galapagos lineup:  an e-reader, a tablet or maybe just an oversized phone (without a 3G connection, of course). One way or another, it’s going to cost us way too much – and to be even more specific, ¥39,800 ($475) and ¥54,800 ($655), for each of the two following versions that the Japanese corp is offering us – a 5.5-inch 1024 x 600 slate and a 10.8-inch 1366 x 800 tablet. And while we cannot be sure exactly what to expect or when we might actually see them out, this year or in the next one, there’s something inside us that tells us the story, which in Sharp’s case is, that we probably won’t see them live on our side of the pond.

Update1: Save the date: Friday, December 10 is when the Galapagos series will be officially released for trendy and most fashionable Japs.

Update2: According to a Mainichi Daily News report, Sharp is planning a big and techy refresh for its upcoming US Galapagos lineup. And when we say “refresh” we mean that the company is said to to include a few things that you probably won’t be able to find inside the Japanese models, such as 3G connectivity, global EPUB content format, and even a proprietary e-book store. Official release date is scheduled for early 2011, but chances are that we’ll find out about it next week at the CES show. 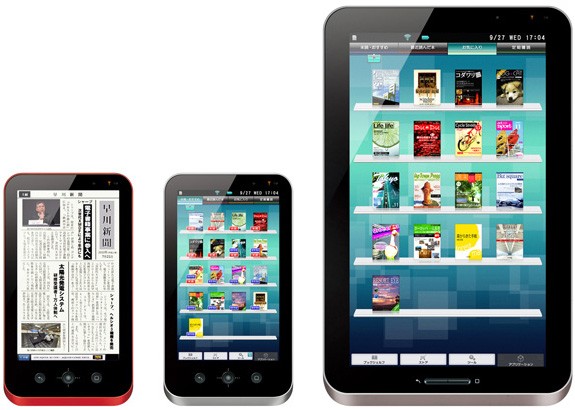