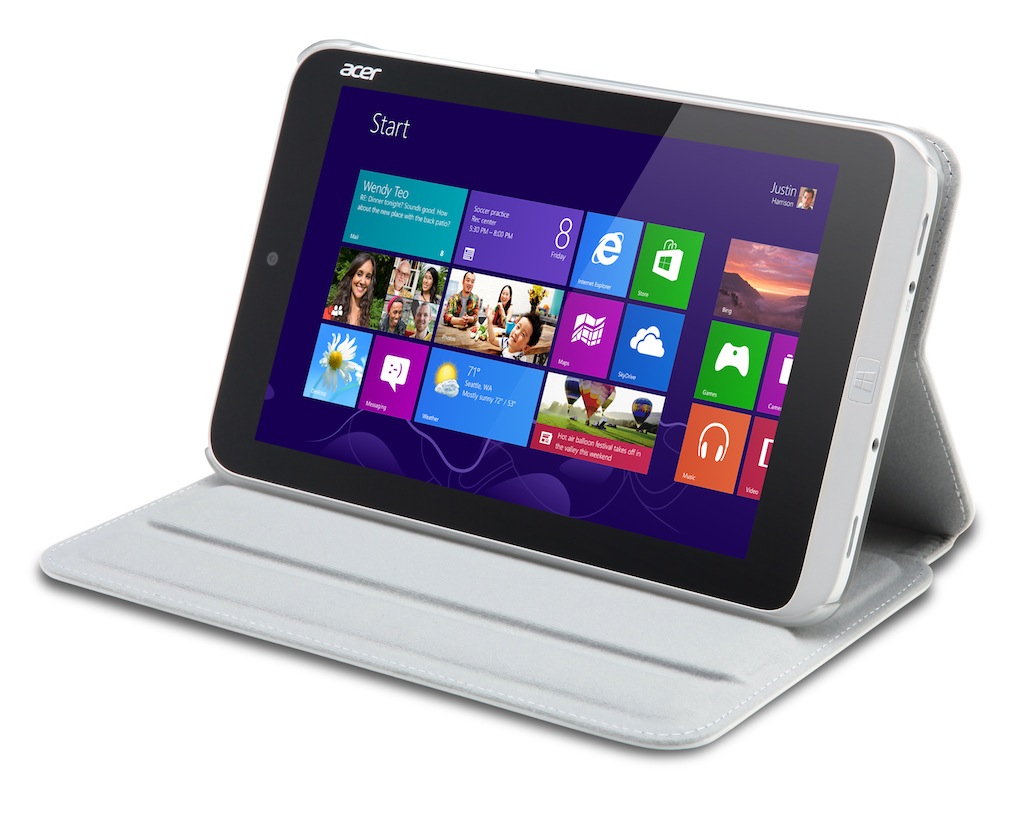 Acer seems to be very active within the mid-range tablet market lately, with most of the attention given to its Android-powered lineup. That, apparently, is about to change in the upcoming months, though, as the Taiwanese corp has quietly launched an 8-inch WXGA slate with Windows 8 as the main OS platform. You got that right, ladies and gents, a mid-range device running Microsoft’s latest Windows 8 Pro onboard. Sheesh, that sounds awesome. But more importantly, it looks so great. And by “it,” we refer of course to the new Iconia W3 slate, which has just been introduced online on the company’s Finnish website. In terms of its technological specs the W3 is nothing out of the ordinary with an Intel Atom Z2760 chip running under the hood, as well as 2GB of RAM, a 1,280 x 768 display, 802.11 b/g/n WiFi and Bluetooth 4.0 for wireless connectivity. Other than that, it sports a 2-megapixel front-facing cam, a microHDMI output, USB 2.0 hub, and up to 64GB of internal storage. The battery pack, if you wondered, is rated to provide up to 8 hours of battery life, and the picture in the info source link also indicates a bunch of accessories like a portable keyboard dock and a cover case that doubles as a stand.

Update: At Computex 2013, Acer has just made the 8.1-inch Iconia W3 official, and boy does it look great. Anyway, as promised the little mid-range slate runs a full Windows 8 version under the hood, tucked with a 1,280 x 800 display, and a dual-core 1.8GHz Atom Z2760 processor. Acer claims the battery life for the W3 to be around 8 hours, and you can choose between either 32 or 64GB storage options, plus an extra 32GB maximum via microSD. As for ports, we’re looking at a micro-USB, and an integrated micro-HDMI slot. But you can also find a pair of speaker grills at the bottom of this slab, a volume rocker to the left, and two front/rear-facing cameras, at 2MP each. In addition, the 540 grams device supports WiFi 802.11b/g/n, and boasts a Bluetooth 4.0 connectivity so you can wirelessly connect to compatible external devices. The new tablet is apparently due out sometime before the end of June (at 329 euros / 379 euros, respectively, and $379 in the US), while pre-orders for the slate will start from tomorrow, it will be made available through all of Microsoft’s retail stores, as well as Amazon, Office Depot, OfficeMax, Staples and Walmart.

Pre-installed with Microsoft Office, the Acer Iconia W3 is the only tablet that can put the desktop into a single hand

The Iconia W3 carefully considers the human element with a design that is compact enough to use comfortably in one hand for reading and web browsing, yet sports a screen large enough for both productivity and entertainment. As a result, it’s ideal for business people, students and families who already use programs such as Word, Excel, PowerPoint and OneNote for school and work.

The Acer Iconia W3 was introduced today at a press event at Computex along with other new products, including the Acer Aspire S7 and S3 Ultrabooks as well as the Liquid S1 phablet. The new line of Acer mobile products highlights the company’s focus on redefining the computing experience through progressive design. #AcerTouch.

“With the Iconia W3, Acer is giving the millions of students, consumers and professionals who create, read, work and play in the Windows environment a single-handed device that does it all,” said Luca Rossi, vice president, consumer business unit, Acer Europe. “These adventurous will enjoy the industry-leading combination of a Windows 8 tablet in a sleek and lightweight 8-inch design, giving them a new and more effective way to take their fun and productivity on the go.”

The Iconia W3’s design makes it incredibly useful for productivity in several different ways. The slim and sleek device weighs only 540 grams and measures only 11.35 mm thin, so it’s easy to take anywhere. The device pairs with an optional full-size Bluetooth keyboard that holds the tablet upright for typing and then conveniently docks to the tablet to lay flat for easy transportation while protecting the screen. The keyboard mirrors the size of those found on larger 13.3-inch notebooks, so it is comfortable to use and makes working on documents and presentations even more convenient. Further boosting productivity, the Acer Iconia W3 was designed with a virtual keypad that is the ideal size for thumb typing, a common way for savvy mobile customers to connect in messaging and social platforms.

Since the Acer Iconia W3 runs Windows 8, it keeps files, photos, and contacts synced across other Windows 8 devices, so customers can work on documents and programs on the go and then conveniently access the most current version from another device. Plus, because it runs full Windows 8, the Acer Iconia W3 is compatible with x86 legacy Windows programs. Consumers can customize Windows 8 by utilizing Live Tiles right on the start page to keep updated on the topics, news, weather and other events that they care about most.

The range of capabilities paired with the slim size makes the Iconia W3 great for sharing at school, work and home. Windows 8 supports multiple user IDs, so customers will have access to their email, Live Tiles and other apps. The device keeps content secure and safe with multiple layers of security and parental controls, even with multiple people using it.

On the Go Performance for Productivity and Entertainment

The new tablet is powered by an Intel Atom Z2760 mobile-optimized processor to smoothly handle a range of apps, including web browsing and enjoying digital media. Plus, the Acer Iconia W3 provides up to 8 hours of battery life(2) to boost all-day productivity in classes, while traveling, or simply for staying in touch throughout the day. Connected Standby helps extend battery life by turning the display off while the device remains powered on to handle background tasks. The Acer Iconia W3 keeps consumers connected to Wi-Fi networks and hotspots with 802.11b/g/nwireless technology.

The crisp 8.1-inch LED-backlit display brings 720p video to life with incredible detail and brightness. The 1280 x 800 resolution makes photos and multimedia as well as text and graphics, appear crisp and clear. The tablet’s front- and rear-facing 2MP webcams ensure that customers can capture images and video for social networking, video conferencing and sharing.

The Iconia W3 was designed to enable quick sharing of data between devices to bring full PC productivity to a tablet form factor. It has a micro-HDMI port for connecting to a TV or external display for sharing presentations, photos and video. The micro-USB port allows easy sharing of data and a connection to devices like phones, MP3 players, USB drives, or a mouse. The new tablet is available with either 32GB(3) or 64GB(3) of internal storage, and customers can add an additional 32GB(3) via microSD for extra storage and convenient transfer of photos and video between devices.