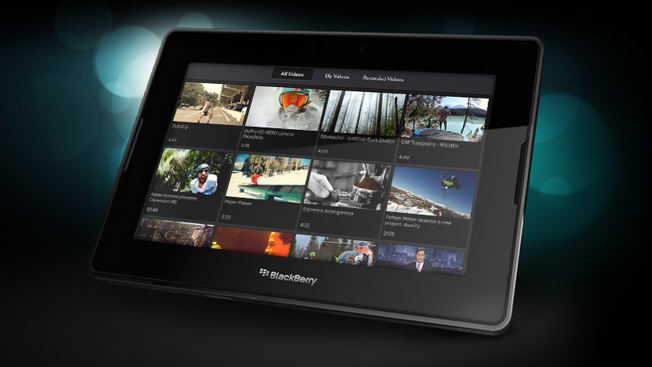 It was Apple that set the price of the iPad at a standard $499 for a 16GB WiFi only version, and now it seems to work fine for all major players in this overcrowded market. RIM was the latest manufacturer to adopt this new pricing model. The Canadian company, originally known for their Blackberry smartphones, has just announced an April 19th release date for their BlackBerry PlayBook line of tablets, both in Canada and the US. And as you might be able to understand from the above, RIM’s average sales price followed the same pattern that Cupertino had already begun to offer: $499 for the 16GB version, $599 for the 32GB model and $699 for the 64GB flavor. Canadian retailers such as Best Buy and Future Shop are also expect to sell the Playbook for around the same price, only in local currency. Full PR after the break.

Update1: And the rumor was right on spot, RIM just announced that its upcoming Playbook tablet will support both BlackBerry Java and Android apps. Great news, considering the fact this would actually include native C/C++ development support, HTML5, Flash and AIR support. Clearly a move that significantly impact the Playbook apps market. More about it after the break.

Update2: And looks like RIM’s latest and greatest dual-core Playbook device is finally up for a purchase, both in Canada and the US, while prices on Uncle Sam’s biggest electronic retailer, Best Buy, start at $500 for the 16GB model, and climb up to $600 for the 32GB model and $700 for the 64GB flavor. Tablet wars are definitely on the rise, now!

Update3: According to analysts, the Playbook sold an estimated 25,000 tablets in pre-order stage and another 20,000 in retail stores. “If correct, 45K+ sell through on the first day would be a success,” Misek wrote in his research note (Analyst Peter Misek of Jeffries & Co).

Minneapolis, MN and Waterloo, ON – Customers eagerly awaiting the BlackBerry® PlayBook™ tablet can begin placing their orders today. Research In Motion (RIM) (NASDAQ: RIMM; TSX: RIM) and Best Buy (NYSE: BBY), a preferred retailer for the BlackBerry PlayBook, today announced the pricing and launch date for the highly anticipated tablet in the U.S. and Canada.

The BlackBerry PlayBook with Wi-Fi will come in three models, featuring 16GB, 32GB or 64GB of storage at $499, $599 and $699 respectively. It is scheduled to be available from all Best Buy stores and Best Buy Mobile stores in the US, as well as Best Buy and Future Shop* stores in Canada, on April 19. Customers in the US and Canada can place their orders beginning today by visiting their local Best Buy, Best Buy Mobile or Future Shop store or by ordering on-line (after 8am ET) at:

“Previews of the BlackBerry PlayBook have generated tremendous excitement and we know that customers are eager to get their hands on one,” said Craig McLennan, Regional Managing Director, North America, Research In Motion. “We share that excitement and we are very pleased to announce that customers can begin placing their orders with Best Buy today.”

“Tablets are becoming a bigger part of our business everyday and the launch of the BlackBerry PlayBook will heighten the level of excitement in this category,” said Scott Anderson, head of merchandising for Best Buy Mobile. “RIM has a tremendous history of producing great mobility products for our customers and we are excited to help launch the BlackBerry PlayBook.”

Developers wanting to bring their new and existing apps to the highly anticipated BlackBerry(R) PlayBook(TM) tablet will soon have additional tools and options to enhance and expand their commercial opportunities. Research In Motion (RIM) (NASDAQ:RIMM)(TSX:RIM) today announced plans to greatly expand the application ecosystem for the BlackBerry PlayBook. The BlackBerry PlayBook is scheduled to launch in the U.S. and Canada on April 19.

“The BlackBerry PlayBook is an amazing tablet. The power that we have embedded creates one of the most compelling app experiences available in a mobile computing device today,” said Mike Lazaridis, President and Co-CEO at Research In Motion. “The upcoming addition of BlackBerry Java and Android apps for the BlackBerry PlayBook on BlackBerry App World will provide our users with an even greater choice of apps and will also showcase the versatility of the platform.”

The BlackBerry PlayBook and BlackBerry Tablet OS are built on the QNX(R) Neutrino(R) microkernel architecture with a 1GHz dual core processor and a leading OpenGL solution, which allows RIM to make this incredibly broad platform support possible.

BlackBerry PlayBook users and developers who are interested in seeing the new app players for BlackBerry Java and Android apps can see demos at BlackBerry World in Orlando, Florida (May 3 to 5, 2011) (www.blackberryworld.com).

Other features of the BlackBerry Tablet OS NDK will allow developers to:

“The response to the BlackBerry PlayBook from the developer community has been exceptional. Our commitment to supporting HTML5 and Adobe AIR development has resonated and spurred developers to create fun and innovative applications for BlackBerry PlayBook users,” said David Yach, Chief Technology Officer, Software at Research In Motion. “The upcoming BlackBerry Tablet OS NDK beta will add C/C++ tools to our repertoire and gives developers one of the broadest and deepest platforms to develop on.”

The Ideaworks Labs Airplay SDK is expected to include support for the BlackBerry Tablet OS soon, making it easy for publishers and developers to use their existing code to bring their games and apps to the BlackBerry PlayBook.

“Supporting a new OS can be a challenge for developers,” says Alex Caccia, President of Ideaworks Labs, “however, integration of the BlackBerry Tablet OS with the Airplay SDK makes this a non-issue. We think this is a far-sighted move by RIM: the BlackBerry PlayBook is a great device for games and applications, and combining this with content distribution via BlackBerry App World brings an exciting new ecosystem for developers.”

RIM has also been working closely with Unity Technologies, providers of the highly popular, multi-platform Unity development platform and Union, the firm’s games distribution service. Through Union, dozens of high-quality Unity-authored games are slated to make their way to BlackBerry App World for the BlackBerry Playbook.

“With a sharp focus on the multimedia experience, very powerful hardware, and fantastic games in the pipeline, the BlackBerry Playbook has all the right ingredients to be a mainstream hit,” said Brett Seyler, GM of Union at Unity Technologies. “Through Union, Unity developers have an opportunity to reach a new audience and grow with another great new platform.”

Visit the BlackBerry Developer Zone at www.blackberry.com/developers for the latest news, information and updates for BlackBerry developers.

Visit the BlackBerry Developer Video Library at www.blackberry.com/go/developervideolibrary to view a variety of instructional videos.

Sign up for the BlackBerry Developer Newsletter at http://na.blackberry.com/eng/developers/resources/newsletter.jsp.

For the latest news and information about the BlackBerry Developer Conference visit www.blackberrydeveloperconference.com.