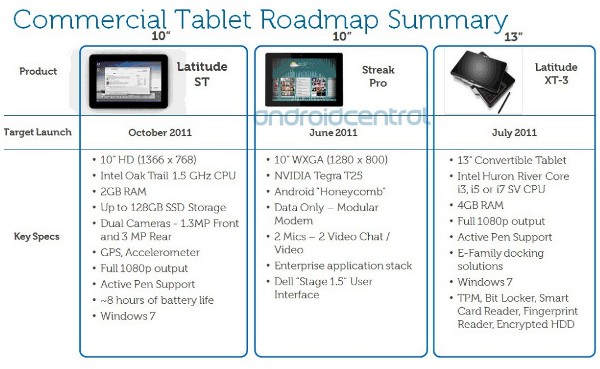 We’ve already seen the Dell tablets roadmap for 2011 – 2012, but the guys over at AndroidCentral seem to have a whole new slide, with more specs and release dates. Apparently, there are three new tablets on stake, one, Latitude ST, running Windows 7 on board, along with Intel’s brand new Oak Trail processor, 1366 x 768 screen resolution, 2GB of RAM, up to a 128GB SSD, dual cameras, an accelerometer, HDMI-out and a removable battery pack which is capable to switch on for up to 8 hours of continuous work. While the other two, Streak Pro and Latitude XT-3, boast a 10-inch and a 13-inch displays, respectively, paired with dual cameras, and Android Honeycomb on top. Regretfully, there is no word on price, but the latest slide indicates the Latitude ST will go live this October, while the Android-powered tablets are claimed to start rolling a bit earlier – The Streak Pro in June and the Latitude XT3, one month later.