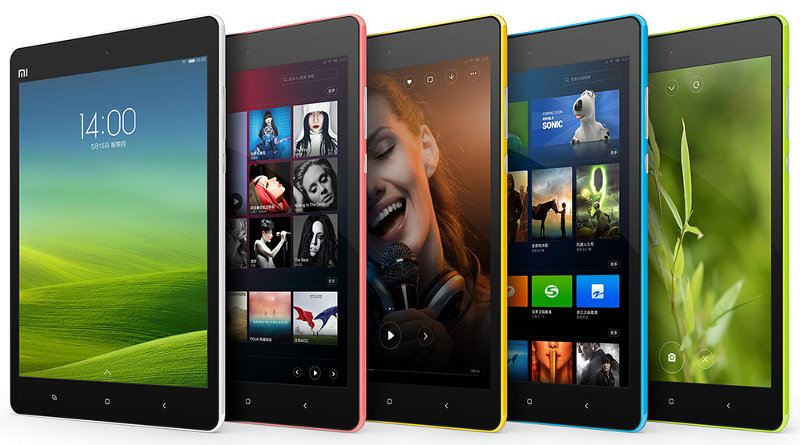 Xiaomi, a company that I think is doing a lot of great things in the mobile phone market these days, has officially launched the Mi Pad, Its first foray into the wild world of mid-range Android tablet devices. It’s clear the Chinese electronics company wants to take some of the tablet profits away from giants like Apple and Samsung but will it translate to success on the field? Well, judging by design and specs it’s definitely a chance worth taking.

The tablet itself, which looks exactly like a colorful outline of the popular iPad Mini, packs a 7.9-inch 2048 x 1536 high-def screen (326 ppi), courtesy of Sharp, along with 2GB of RAM, a WiFi-only internet connectivity, your choice of 16 or 64GB of built in storage, as well as a microSD slot, supporting up to 128GB of extra portable storage.

Xiaomi’s Mi Pad tablet runs a new version of its own MIUI, based on Android 4.4.2 KitKat. It is also one thin and light product, measuring in only 7.5mm thick and weighing 360 grams. The battery of the Mi Pad is 6,700mAh and the company promises to deliver 11 hours of video playback and 86 hours of quality audio.

Some other parts of the upcoming slab include Nvidia’s next gen Tegra K1 SOC, featuring a 2.2GHz 4 plus 1 core CPU and a 192 core Kepler GPU. For imaging, there is an 8-megapixel rear camera with flash and f2.0 aperture and a 5-megapixel front-facing variant for those free video chat calls.

While the actual release date is still under wraps, the launch is expected in a few months period (perhaps in time for the holiday season). Meanwhile, we hear that the slate will go on a beta test program in China sometime in June.