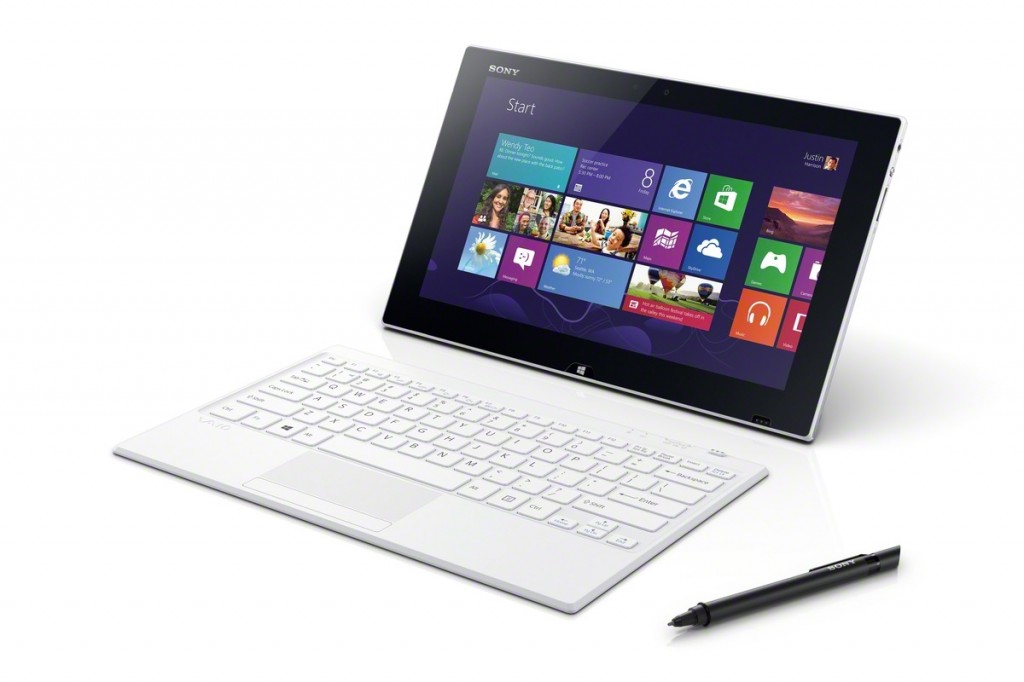 Sony products always seem to be on the high side, with simple and elegant design, but also with a very high price tag. The Vaio Tap 11, which was recently announced by the Japanese corp at the IFA 2013 tradeshow, is no exception. In fact it’s fully loaded with many of impressive new features. The 1,920 x 1,080 IPS screen on this slate is beautiful. It measures 11.6 inches diagonally and is extremely clear and bright. Additionally, It will also include an N-Trig digitizer to enable more expressive forms of pen-touch input.

The new Tap 11, which is claimed to be the “world’s thinnest tablet PC” is obviously trying to take on Microsoft’s flagship Surface Pro. It’s only 9.9mm thick, and like the Surface, boasts a fully retractable kickstand behind, for portrait or landscape propping. The Windows 8 tablet turns on fast and aims to combine PC power and tablet portability in one single slab. The Vaio Tap 11 runs on Intel’s new Haswell CPU, with your choice of Core i3, i5 or i7 processors. In addition, it packs 4GB of RAM and a range of 128GB to 512GB SSD storage configuration. As far as battery goes, Sony says it will offer up to 6 hours of battery life and can be charged in a reasonable time. There’s also NFC on board, which supports one-touch pairing with Sony’s range of machines.

Apart from all that, the Tap 11 is also equipped with a full USB 3.0 port, a micro-HDMI input to connect LED TVs and some other HDMI-capable devices, a built-in IR remote, microSD card slot, dual stereo speakers, and a front 2 megapixels shooter plus an 8 megapixels rear-facing camera, tucked with Sony’s own Exmor-RS sensor. Software wise, you’ll have pre-loaded inside a nice batch of Adobe Creative Cloud programs.

Along with the Vaio Tap 11, Sony is offering a slim & detachable wireless keyboard that can also be used as a nice protective cover, in particular when you charge the battery. There’s also a touchpad built into the chiclet keys, and it can be turned off at the switch on the keyboard.

Both price and availability are to be determined, so you’ll have to wait a while if you want it.